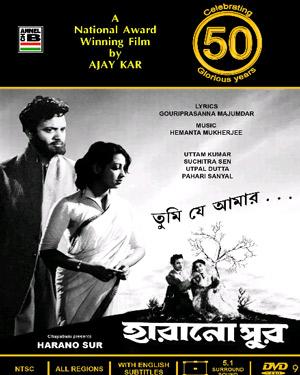 Rama, a female psychiatrist at a mental institution, quits her job in protest of an older doctor’s treatment of Alok, a patient who has lost his memories after a train accident. When Alok tries to escape from the hospital and takes shelter in Rama’s institution housing, she decides to take him with her to her village. Having been trained in a newer form of psychiatry, she knows that Alok will not improve under treatment by the doctors at the hospital, and that she is the only one who knows how to treat him properly.

As Alok settles in with Rama and her father, he improves thanks to Rama’s expert treatment and the countryside environment. In time, Rama falls in love with him and they are married with her father’s blessings. While Alok tries to apply for jobs, Rama makes a bit of money working as an ordinary physician for the villagers. One day, on his way to mail an application, Alok has another accident which returns his previous memories, while making him forget all about the last few months at the hospital and his time with Rama. Confused by his situation, he returns to Calcutta and his old life as a wealthy businessman.

Rama follows him to Calcutta, and after wandering through the streets for days serendipitously sees him entering his office building. After a brief meeting, she takes up a position as his niece’s governess. Alok has no memory of her at all, but she hopes that, by staying near to him, she can jog his memory. But then she discovers that he has a fiancee, Lata, who is suspicious of Rama’s intentions. Will Alok’s memories return in time? Or will Rama be humiliated and sent home in shame?

Harano Sur is a famous Bengali movie from the Golden Age of Bengali cinema. It stars one of the favorite screen couples of that era, Uttam Kumar and Suchitra Sen, as Alok and Rama. But how does it hold up 60 years later?

In many ways, this movie is very progressive in its treatment of women. Rama, the main character, is a highly educated woman with a degree in medical psychiatry. She is a firm and outspoken advocate for the rights of her patients. In conversations with her father, it is clear that he respects her and supports her ambitions. He very reasonably worries about her when she chooses to work in Alok’s house as a governess, but, importantly, he respects her decision to do so.

Alok himself is also respectful towards Rama. One of my favorite parts of the movie is when (pre-second accident) he affectionately calls her “Doctor-babu.” “Babu” is a term used to show respect in Bengali, and is generally reserved for men. Its use in this context demonstrates that Alok respects her as a medical doctor and as a person. Then, when she begins to work in his house, he treats her with respect despite the fact that she is his employee. In fact, it is this respect which arouses Lata’s suspicions.

At the same time, Rama faces many instances of overt sexism over the course of the film. The way she handles them indicates her strength of character. For example, at the beginning of the movie she is scolded for questioning another doctor’s treatment plan. This scolding is not just because of her relative inexperience, but also (and more importantly) because she is a woman who has the audacity to contradict a male superior. When faced with the option to either shut up or quit, she opts for the latter. Never mind that she will be hard pressed to find another job that suits her skills so perfectly; she will not stay in a situation that she finds morally reprehensible.

Unlike some newer Indian movies, the characters who treat Rama with respect are considered to be the “good guys.” This is immensely refreshing, and not something that I expected from such an old film.

I enjoyed this film as an example of early Bengali films that were not directed by Satyajit Ray. It was a nice story about a strong female character, even if the love story was a bit sudden. The acting and filming was also lovely, although Uttam Kumar could do with a bit less makeup.

The one thing that made this movie less enjoyable was the pacing. Harano Sur is 162 minutes long, and it feels like it. On the one hand, this pacing is ok: it was the style at that time, and it allows the characters to breathe and really show their emotions. But on the other hand, it makes the movie difficult to sit through. I had to finish it in several sittings.

I highly recommend this movie for anyone interested in film history, or anyone who wants to watch a nice romantic movie with a strong female protagonist from the 1950s. The film was not very well-preserved, so unfortunately the video quality is not very good. The copy that I watched (the DVD version) sometimes has abrupt edits where the film had deteriorated and needed to be spliced together. Still, despite that, it is a lovely movie.