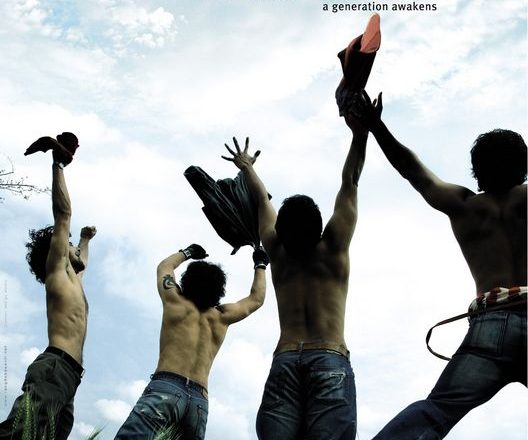 Every movie while telling the story sets certain expectations what it will be like. Some movies fulfill the expectations and some can just blow you away with unexpected. “Rang De Basanti” is in the latter group. First two thirds of the movie I watched considerably calm and very engaged and after the last third I just kept staring at the screen thinking “what just happened?” I will try not to put spoilers in the review, but if you do want the surprise effect, I’d recommend watching the movie first.

The basic story goes like this: a young British filmmaker Sue goes to India to make a documentary about early XXth century Indian revolutionists. The story she wants to tell is based on her grandfather’s diary. He was an imperial official during that time and directly witnessed the story. Sue has a very strong determination to make the film, even after hearing the news that she did not receive the necessary funds. She goes to India only to find out that the revolutionary heroes are quite forgotten by the youth. Instead of national pride, feelings of apathy and helplessness prevail, or on the other side of spectrum discrimination and resentment to “everything Western”, going back to the “pure Hindu culture”. She finds friends there who become part of her documentary project. While making the film this youthful bunch of contemporary rebels finds within them something they did not even expect existed.

There is a lot to say about this movie, so I will start from history. First of all I will introduce the famous revolutionaries: Bhagat Singh (played by Siddharth), Ashfaqullah Khan (Kunal Kapoor), Ramprasad Bismil (Atul Kulkarni), Rajguru (Sharman Joshi) and Aamir Khan plays Chandra Shekhar Azad. Like most revolutionaries around the world in the beginning of the XXth century, they were firm believers in socialism, and keen readers of Marx, Engels, Lenin, Bakunin and other Marxist and anarchist authors. Also, as many fighters for independence (from British Empire) in India they joined the non-cooperation movement started by Ghandi. However, many of them were disappointed by the ahimsa (non-volience) inspired ways Ghandi used in philosophy. For revolutionaries they did not seem affective. After Ghandi withdrew the movement when Chauri Chaura incident happened (when villagers attacked and killed a few of policemen), there many who tried different, more aggressive methods. Inspired by French and other revolutionary stories, the introduced revolutionaries planned and executed many acts disturbing British colonial rule. Probably the most famous of these is Kakori train robbery, which is also depicted in the movie. The British responded by organizing intense manhunt and capturing many of the conspirators and eventually hanging them for their crimes. (Source: Wikipedia)

The stories about how the freedom fighters accepted their deaths are heroic and touching. Bhagat Singh actually wanted to die, as he knew the value of martyrdom

It is easy to kill individuals but you cannot kill the ideas. Great empires crumbled, while the ideas survived, – he said.

This is when I remembered “1984” and the part where it is said, that the government does not kill their opposition, as this makes them immortal martyrs. They capture them and make them love the system, make them love The Big Brother.

The attitude of Indians themselves towards the rebels was diverse. Ghandi condemned the violent actions of revolutionaries saying that

By making a dharma of violence, we shall be reaping the fruit of our own actions. – Ghandi.

However, others in government (like Jawaharlal Nehru, who became the first Prime Minister of India) and common people considered and still consider them great heroes. It is really understandable considering the atrocities that British committed in the country, like the Jallianwala Bagh massacre (also depicted in the movie) where more than a thousand peaceful civilians were shot to death. In face of these events the path of non-violence is a very difficult one. (Source: Wikipedia)

I’ve committed my life to the freedom of this country. Comfort and other worldly desires do not attract me. I know you want me to get married and settle down like all parents do. But freedom is my bride; I hope you’ll forgive me. Your most obedient son, Bhagat – this Singh’s letter to his parents is not only a monument to his sacrifice, but to the sacrifice of all freedom fighters.

The other part of the movie, which actually takes up much more time than the depiction of historical events, is the life of ordinary students. I would certainly classify this as a “Real India” movie, as it depicts real youth with their issues – the mixture of tradition and Western culture, the “I don’t want to get involved with politics” attitude, alcohol, dancing and the feeling of youthful carefree and invincibility. The director also weaves in the particular issues of Indian reality, the different regional cultures, tension between Hindus and Muslims. As a story behind the scenes tells, the director actually wanted to make a film about the revolution directly, but discovering that the youth today do not care so much about past heroes, he decided to make it through a perspective of the modern age (Source: Wikipedia). And it was indeed a good decision, as blend of the historical and the modern part is emotionally and technically brilliant. A lot credit goes to the great cast. They also had a guest producer – David Reid (who worked as assistant director on such masterpieces as “Snatch” and “Lock, Stock and Two Smoking Barrels”), so I assume he had to do a lot with visual/technical aspects of movie. Along with wonderful soundtrack “Rang De Basanti” makes a pleasant watch, capturing attention for the whole almost-three-hours Bollywood film time span.

A lot has been said, but I will add a more personal note to this too. I felt so moved watching “Rang De Basanti” not only due to the brilliance of the movie itself, or the fact that I like history and the culture of Asian nations, but also how relatable it felt. The story of the independence struggle of my country is even more recent – just around twenty years ago we had such epic event as Baltic Way, where people of three Baltic nations formed a human chain spanning over 600 kilometers as a stance for freedom against the Soviet Union. And now, just twenty years later, exactly the same apathy and helplessness prevails. People say exactly the same words as “Rang De Basanti” characters – how “nothing will change in the government and we cannot do anything about it”, how “they will graduate and go away from this country as it is not worth it staying”. And I think many countries around the world have similar tale to tell, so this movie and its message is not just for India, it is for so many of us:

No country is perfect. You got to make it perfect.