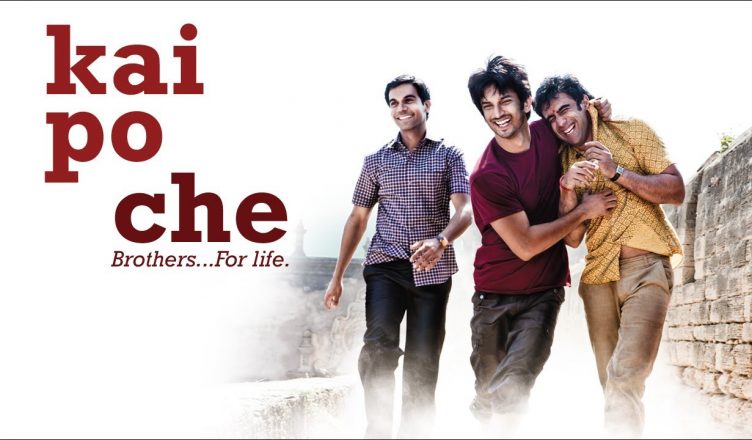 Often compared to Rajkumar Hirani’s 3 Idiots, Kai Po Che is one of these recently popular Bollywood movies about male friendship with all the staples that come with it. However, that is where the similarity of the films end – just on the surface level of the stories. Otherwise, Kai Po Che fails to deliver on the basic promise of the film – that nice fuzzy feeling you have when seeing a good friendship story.

Ishaan (Sushant Sing Rajput), Omi (Amit Sadh) and Govind (Rajkummar Rao) open a sports shop selling cricket equipment. Being a former professional player, Ishaan also gives lessons to kids. The shop thrives and the entrepreneur of the three, Govind, pursues a bigger dream to open a shop inside a mall that is being built. However, their plans are disturbed first by a massive earthquake and then by religious riots, both referring to actual events.

The first failure of the film is the characters. All three guys are very plain. Their relationship seems to only revolve around Ishaan and his childish tantrums and amazingly irresponsibly behavior. We meet him being absolutely disrespectful to his sister and father, and then going off and violently attacking a guy in a car because he was honking too loud and disturbing him watching a cricket match. We later are told that he used to play cricket professionally and he is now so angry because he had to quit. But there is no explanation about why he had to quit, nor why everyone around him is acting as submissive punch bags. Oh, and this is the guy the audience is supposed to like and feel sorry for eventually.

Omi has basically no personality. His existence seems to be dependent entirely on his relation to Ishaan’s wants. Because of Ishaan’s outburst against his father, Omi has to go to his uncle to ask for money. The uncle is a leader of an extremist Hindu political party, which opposes the Islamic political party of the town. Omi unwillingly gets into the parties activities and gets so absorbed, that eventually he takes part in a violent attack which kills people. Again, the movie wants us to feel for this character too, but as he does not really voice his opinion and is a shell of a character… well, it is hard to relate.

Govind is the businessman and the peace-maker of the three. His biggest achievement in the film was dating Ishaan’s sister… behind his back… for years… because he was afraid of Ishaan’s reaction.

The second biggest failure of the film is the portrayal of the traumatic historic events. The earthquake refers to 2001 Gujarat Earthquake and riots were 2002 Gujarat riots the film wanted to use these as pivotal events changing the lives of the characters, but it failed in seriously addressing them. Ishaan seemed to be more disturbed by the discovery that Govind is dating his sister than by all the death’s around him. Deepa Deosthalee in her essay in Film Impressions analyses another fault of the film – the lack of any female characters in the three friends lives. But she also mentions the latter:

Still, particularly in the riot scenes, the overwhelming presence of men fighting an old-fashioned war with swords and petrol bombs, as opposed to a human tragedy in which women and children were raped and murdered, isn’t just inaccurate, but naive and reductionist.

The third failure, that is connected to the first two, is a lack of consistency and any clear message of the film.  Obnoxious behavior of the characters we are supposed to relate to and feel for, leaves the spectator (well, at least me) very confused. And if the portrayed violent behavior of the “hero” was something that this film encourages, then it becomes a disturbing and a sad message.

I rarely go out writing negative reviews about any film, but Kai Po Che”s wide spread popularity does puzzle me. Nice music, a few montages, and jumping into the sea is not enough to create a genuine feeling of emotional bond among people, not does it between film and the audience. At first Kai Po Che can seem like it has substance, but when you look closer it overwhelms with it shallowness and insensitivity. It is like a poorly made but pretty looking cup cake, that tries to cover its shortcomings with overwhelming sweetness. It seems okay at first, but leaves a bad taste in the mouth.