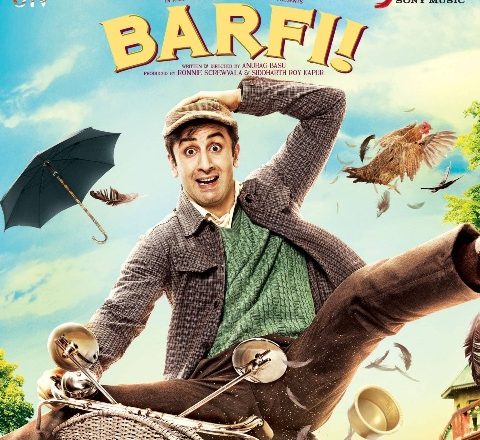 I heard this from a famous yoga master. But what if there are no words, only silence? This is the challenge that director Anurag Basu takes upon – the main character of the movie is deaf and mute. To make it even more challenging he adds an autistic girl and a girl with “normal” abilities to make a love triangle. With this difficult mix director is able to make two and a half hours of a good comedy and I think an even better drama.

I will analyze this film though the characters. First of all – the main character whose name is the title – Barfi (or Murphy, as he was called by his parents, who named him after a radio brand). He is played by famous Ranbir Kapoor, fourth generation of Bollywood’s “First family” – the Kapoors. This role is considered the highest point of his career and he is indeed brilliant (Source: Bollywood Life). Barfi is deaf and mute, but, as his best friend says, “that didn’t stop him from being stubborn”. He is rather a rascal, but kind-hearted one, and most people get to like him. The way he expresses himself is mostly though Charlie Chaplin, Buster Keaton, Benny Hill or Mr. Bean style physical comedy. This is in my opinion the only reason to call this film a comedy, as everything else is rather a heartbreaking drama. Just as silent era film was restricted in it means of expression without a verbal one, so is Barfi, having to use this primordial medium of bodily expression. It is an interesting play with the medium of film – having such character in a sound film and letting him “talk” in the silent cinema language. In this way Barfi becomes empowered, as other characters around him are dragged into this Chaplinesque world with its rules, and they have to follow. Moreover, the contrast between funny and serious scenes is so high that it is emotionally loaded to see the character in dramatic parts of the movie.

Kudos to Priyanka Chopra – first for taking up a part of the autistic girl, and second for doing a wonderful job of it. It is a very ambitious role for any actress especially considering the sensitive topic. Her performance is considered equal, or even higher, than that of Ranbir Kapoor. And in the movie we really don’t see a Miss India and Miss World, India’s fashion icon Priyanka, we see only autistic girl Jhilmil and her world. Just like Barfi, she is restricted in ways she can communicate with the world. Her way is more visual, sensual and in repeated patterns. Both having suffered alienation from the “normal” world, Jhilmil and Barfi find a very strong common ground and develop a relationship. While logically their romance is rather obscure, in this weird fairy-tale setting of the film their love is shown gracefully and dignified.

The last corner of love-triangle Shruti is played by Ileana D’Cruz. She is an actress of Telugu and Tamil cinema and “Barfi!” was her debut in Bollywood. Shruti is the one who Barfi falls in love with at first. However, even though she loves him too, eventually she chooses a more “appropriate” spouse. While Ileana’s performance was good, Shruti is the bleakest character of the three. She is always at the effect of things happening around her, influenced by others and never making her own decisions. Eventually when she does make one, it appears to be too late. I assume it was a conscious decision of the director, to make a contrast for the other two characters, but I think it was slightly overdone. Even with that, Shruti’s storyline is really good, it is about decisions in life and that many of them do have expiration date. The fact that her story does not end well is a strong point of the movie.

Visually, the movie is very beautiful. I think the camera angles and movement really try to portray the different worlds of the three characters. It has very nice soundtrack (I especially love the song at the beginning of the movie, which actually breaks the 4th wall, as it speaks to the cinema theater audience to turn off the mobile phones and not to disturb other people with its funny lyrics) and fully uses the visual aspects of filming locations (though some enhance digitally to portray the 70s, the time for most of action in film).

And yet, as one of reviewers expressed, it “walls short from being a masterpiece”. The asset that Bollywood movies have, largely being longer than Hollywood production, is that they have time to introduce characters, develop emotional attachment to them and then really move the viewer with a strong culmination. This was very well done in “3 Idiots” and “Rang De Basanti”. However, “Barfi!” tells the story through many timelines, fast-jumps often through them and gives out a lot how the story ends in the beginning, this way it takes out from the emotional impact in the end.

Though not a masterpiece, “Barfi!” is very special. It is a brave movie that touches a sensitive subject of disabilities. In Western film media this is quite a taboo, and in India it has another dimension – in traditional karmic belief, a person’s disability is a proof of bad deeds in a past life and manifestation of cosmic justice. When this subject is depicted in cinema, the usual storyline is the struggle about how an individual goes from being “dis-abled” to “differently-abled” and proves him or herself to the skeptical world.“Barfi!”goes beyond this typical storyline and succeeds.