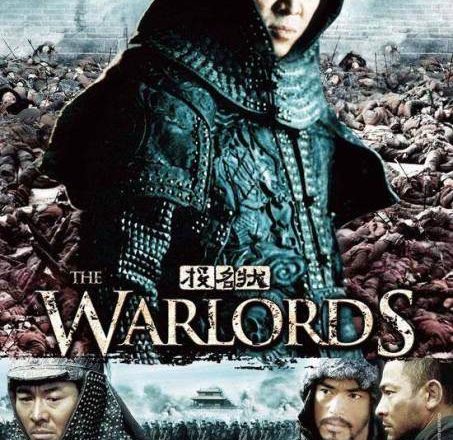 “The Warlords” on Amazon.

Lately China’s mainstream cinema has been all about retelling historical events through visually beautiful action films. “The Warlords” certainly fall into this category. It’s a historical drama loosely based on an event in the XIXth century, during the Taiping rebellion when general Ma Xinyi was assassinated. Movie manages to show both the masterful battle scenes and the dramatic relationship between the three Blood Brothers involved, Pang Qingyun (Jet Li), Zhao Er-hu (Andy Lau) and Zhang Wen-Xiang (Takeshi Kaneshiro).

The historical background of the movie is actually very fascinating. Late Qing dynasty was a time of turmoil in China. It had a lot to do with European Colonial expansion and major power shifts in the world. OK, I will make a leap back in time for an overview of these major shifts and what fueled them.

For a long time in world trade European countries were an underdog, compared to the riches of Orient and some African kingdoms. The marine path to Asia was not discovered until Vasco de Gama.  Prior to this Europeans did not have good marine technologies and were forced to trade by land, usually through Arab merchants. Moreover, Europe did not have much to offer for trade that Asian wanted.  Asia had silk, spices, china and all other goods that Europeans had to pay the gold price for. This led to more investment in ships and explorations, which subsequently led Europeans to “discover” Americas, maritime paths to Asia and started era of colonialism.

For ages Chinese rulers had a negative view on European goods and tradesmen and enforced trade restrictions. The Opium Wars (XIXth century) were this modern concept, a war not for land, not for goods, but a war to open trade. China lost horribly against modern warfare of British Navy. This led to civil unrest, especially geared against the foreign regime of Qing Dynasty, who were Manchurians. The Taiping rebellion was the consequence of these events. And this is a whole other very obscure and interesting story.

You would not expect Christian extremism in China, but the Taiping Rebellion is story about that. The leader Hong Xiuquan said he had visions from God, and that he is the bother of Jesus. His mission was to get rid of the corrupt government of Qing Dynasty and Confucian system that prevailed in Chinese society for ages. He formed a sect which grew in power, rebelled, won many battles and even established a state – Taiping Heavenly Kingdom, with a capital of Tienjing (“heavenly capital”, today’s Nanjing). There they enforced new laws: private land ownership was abolished, instead of Confucian classics, statesmen had to study the Bible, women were proclaimed equal to men and allowed to take state exams, foot binding was outlawed, and the society was classless. The Kingdom eventually fell, and Hong Xiuquan died from food poisoning when the under siege city ran out of supplies. But, his legacy continued on. Later China’s modernization movements admired these rebels for their ideas, especially the dismissal of Confucianism, which was thought to be cause of China’s “sleep”, which led to the stagnation of this powerful nation. The rebel’s, most of who were from the lowest classes of society, ideas of state property, sex equality, and classless society were (not surprisingly) admired by Mao Zedong, who (kind of) implemented them. But this part of history is already more familiar to most people. (Source: Wikipedia)

So, if you have seen the movie and have read up to this point, you might be thinking “there is nothing of this in the movie” and it’s true, but partially. Firstly, it was interesting for me to catch parts of the film where the actual historic background is referenced, for example Zhang Wen-Xiang gives Lian (a woman, also involved in the drama between the main characters) a small cross, that he snatched from a dead rebel soldier during attack, not even knowing what it symbolizes; leader of Suzhou city self-sacrificing for his people and jumping on Er-hu’s sword, they both fall into a small water basin – this scene symbolizes baptism, and at this point Er-hu in his heart sides with Taiping rebels.

Secondly, knowing the historical background it is easier to understand logics of the movie and the moral dilemmas of characters.

I used to think we only kill to survive, – says Er-hu, – now I see that we must also kill to do good.

But whom do you kill to do good? Jet Li character suffers most of the dilemmas and he is a very atypical, complex hero. He has an affair with a woman of his blood brother Er-hu, however they have a true deep connection, passionate love; he drags villagers into imperial army causing lots of suffering, however it did seem to be the only option; in desperation he even sides with his nemesis. All the time in his mind he has a vision of great, brighter, more compassionate future for all people and to this vision his blood brothers also aspire.  But reality is harsh and he seems to dig himself deeper and deeper into despair, mostly because he sided with the corrupt Qing government (and they are shown to be very cunning, arrogant and backward). So even though he is a brilliant general and wins all the battles, eventually he loses, he betrays his blood brothers and is assassinated by the same government he did everything for.

There is also one nuance in the movie I like, being a fan of technological determinism theories. Movie shows the clash between the old and modern in many ways, especially with the firearms, the superior warfare technology. There is a lot of hand-to-hand combat and our three heroes are very good at it, but movie shows you cannot fight the modernity, these major global shifts and changes (a good book to read on the subject is Jared Diamond “Guns, germs and steel”). The age of old heroes is gone. I like the sequence of the movie which symbolizes this – in the beginning of the movie Qingyung saves Er-hu from a gun with a spear, and in the end he himself is secretly shot in the back with a gun.

I will add yet another dimension to this review and it comes from old legends and China’s religions. The story of three blood brothers is borrowed from a legend about Guan Ti, the red face god. The legend tells he was a simple bean-curd seller, but with a very righteous mind. He killed a corrupt magistrate who forced a poor woman to be his concubine. He was hunted for this but his face changed to red, and therefore he could travel unidentified. Then he met other righteous men – Zhang Fei and Lu Bei and took an oath of brotherhood with them. All together they fought great battles in a chaotic period of Three Kingdoms. They were loyal to each other until death (*information from Wikipedia and Encyclopedia of Eastern Philosophy). In movie they show this story during a dinner, where actors are dressed up as the three brothers and tell of their loyalty and brotherhood. This explains why Er-hu starts crying and laughing watching the actors – he knows the legend and can see how similar and yet different it is from his own life.

And with this entire intro I have to say movie is far from perfect. It is indeed visually beautiful, battle scenes are spectacular, and acting is perfect. However, it wants to pack so much into two hours and paces the story too fast. I agree with some reviewers, that it could have done very well without the romantic element, it just adds more confusion, and there is enough of tension without it. Or I would have gladly sat through 3 hour movie, but they made it for international market.  Only a few movies, such  as “The Lord of the Rings” can pull off three hours and commercial success. So to make it fast paced they cut the screen time of the drama built up between the blood brothers. When I was watching movie the first time it did not seem very logical and fluent. They also cut the time to explain anything about the Taiping events, and it leaves the Western viewers who know nothing about it in the dark.

In their defense they did make a good job making it exciting war-action movie to make up for lack of explanation, so the story behind it is more for Chinese viewers. It was also nice to see the famous actor trio all together and doing a very good job portraying the intense drama and yet not getting too dramatic. When I watched the movie first time I did not think even to review it, it was good, but something was missing. However, it is appealing and was well received by critics, so I decided to do a research and re-watching it while researching was very pleasurable.