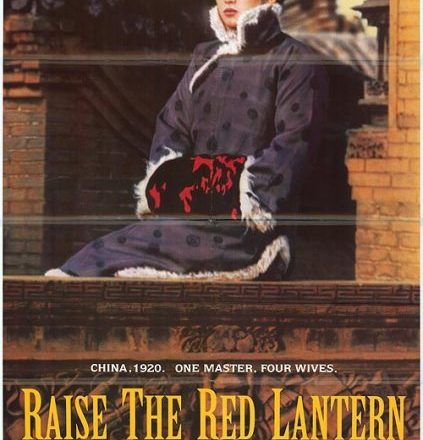 “Raise the Red Lantern” was named in a list of “25 movies you must see before you die,” and is considered a monumental piece of cinematography that brought a different vision of Chinese film to the West. The Sinology professor at my university named it as her favorite movie of all time. With this build up, you expect to see something huge, and the movie does hold up to those expectations. Adopted from a novel by Ni Zhen, Wives and Concubines, the movie takes viewers behind the closed doors of a Chinese noble estate. Zhang Yimou carefully crafts a tragic story of women’s lives that are confined in this territory and in the grasp of ancient tradition.

The story is set in 1920s China where Songliang, a 19 year old student, finds herself in a dilemma. Her father has passed away, and her stepmother urges her to drop out of university and get married. We see her talking to the stepmother behind the screen:

Alright, I’ll get married… What sort of man? Is it up to me? You always talk about money. I’ll marry a rich man. If I have to be his concubine, I will. Isn’t that the fate of a woman?

Thus she becomes the fourth wife of a rich, fifty year old noble, Chen Zuoqian. At first she tries to differentiate herself from the traditions of the estate. She does not use the palanquin sent to her, but instead walks to the lord’s home herself. This is a big deviation, as traditionally, when women are taken into their husband’s home, they have to at least pretend they are doing this unwillingly. By this, they show respect and love to her parents, as if she does not want to leave home. In the estate, Songliang is looked upon with keen interest as she had been studying at a university. However, that does not give her any advantage as she has entered a very different little world, the rules of which she must learn step by step. She realizes quickly that wives do not have any real power. Their relative power depends on whom the master chooses to spend a night with. This is done every evening through the tradition of raising a red lantern in front of the door of the chosen one, which gets her the attention of servants, her preferred meals and a foot massage. More and more she realizes the grim reality of her future, and starts playing the intrigue game herself. But that just brings more misery and tragedy.

The action all revolves around the relations of five women, the four wives and one servant girl. Each of them is a tragic figure in their own way. First Wife, Yuru, is already old and mostly forgotten. She supposedly has power and respect, as she is the First Wife and had given the lord his first son. However, she is relegated to a boring and humiliating life cycle.  Every evening all wives, including her, have to wait for the lantern to be places in front of their door. She knows each night it will not be her, but she still must be there and watch as the other, younger females, are chosen for the night. She is like the discarded old toy of the lord. The other wives do not pay much attention to her either, playing the intrigue games among themselves.

Second Wife, Zhuoyun, is nearing middle age, and she is the only one who greets Songliang in a friendly manner. She has produced a daughter, but hopes to give the lord a son. She does every possible thing to keep his attention, and we eventually learn the true nature behind the smile. Meishan, the third wife, describes Zhuoyun as having “ a Buddha’s face, but a scorpion’s heart;” however, we can view her sympathetically too. She is a product of her surroundings, confined to a life where the only escape from boredom is the petty game of intrigue. This is the only reality offered to the wives, so it becomes extremely real and important to them, as they have no connection to the outside world. Zhuoyun is getting older, and she feels her beauty fading. She is deathly afraid that she will fall out of favor and be discarded, just like the first wife. Therefore, she does all that is in her power, going to absolute extremes to keep the small amount of satisfaction that is left to her in life.

Third Wife, Meishan, is a former Beijing Opera singer, and she seems to be the most arrogant, demanding the lord’s attention at first. She feels threatened by the new wife, Songliang, and schemes openly to keep the lord’s favor to herself. She has her room decorated with Beijing opera attire, and often sings to herself in the empty spaces of the estate. There is such sadness and desperation in those singing scenes. There should be an audience to appreciate her talent, but that life is in the past. Now she is trapped, and tries to keep her dignity, humanity and feeling of personal power in the only ways possible to her.

Yan’er is Songliang’s handmaiden, and when we see her first time, she gets very angry when she finds that Songliang is now the fourth wife. The reason for this comes clear later, as apparently the old lord is not satisfied just with his wives, but he has also slept with the teenage servant too. Yan’ar believes in a fairy tale dream where she becomes the fourth wife, but her dream is shattered when Songliang arrives. We see Yan’er constantly scheming against Songliang, but then again, we can also understand her tragedy. As a poor servant girl, she has no way of getting anywhere above the social class she has been born in. She has been used by the master, and that would also be an obstacle to find a future husband, so Yan’er unleashes her anger and disappointment on Songliang. Eventually, we see how stubborn and strong her character is as she fights to keep what dignity she has left, even if it means her doom. We see the whole story through eyes of Songliang, and as time passes, she becomes more miserable and desperate. At one point, she meets Feipu, the lord’s son from his first wife. There is some romantic tension between them, perhaps a glimpse of a better life. This only makes the reality even more bitter, as she knows it is an impossibility, forbidden to her. Her story ends in a “mental suicide,” as she refuses to acknowledge living in this reality.

The movie depicts the absurd theater of ancient Confucian rituals performed in the wake of the 20th century. The Confucian relationship of husband and wife puts the husband in power, and the wife in servitude. There is a well-known book, Lessons for Women, written by Ban Zhao, the first known female historian from the 1st century A.D. In the book, she advises wives to always be submissive, faithful, and to serve the husband and his family.

Nothing is better than obedience which sacrifices personal opinion.

It was first time in history that women got such attention from a Confucian morality point of view, as Confucius himself did not talk much about women. While Ban Zhao’s advice seems very anti-feminist from a modern perspective, she was giving advice to women in order to live and survive in a patrilocal marriage. Usually they would be there by themselves among the husband’s family, and only get a degree of authority once they gave birth to a boy. (Information from The Great Courses lectures with Prof. Grant Hardy). “Raise the Red Lantern” shines a harsh light on these traditions, and shows how inhuman and abusive they can be. A husband is given power over his wife (and concubines), but traditionally he is also expected to respect them and live in harmony. However, personal power can be often abused, and as in other movie by Zhang Yimou –  “Ju Dou,” we have examples of it in this film. Both of these movies show how impossible it is to hope for dignity and happiness in these conditions, frozen by ritual and absolute male authority. The oppressive authority extends over physical body, sexuality, identity, condition of mind and eventually even life and death.

Visually movie is crafted to perfection. The amazing thing I noticed is how even though the setting is so beautiful, with the lanterns, the beautiful estate, and the clothing, the film manages to convey the feeling of how stale and old it is. Everything is dusty, and there is no emotion in the actions of servants preparing the rituals. It all seems mechanical and robotic. The same imagery could be used to praise the rituals, and show their beauty, but the cinematographic mastery conveys the true intended meaning of the visuals.

Some critics view the film as an allegorical critique of authoritarian rule in China, and as a matter of fact, the movie was banned in China for some time. The struggle of the individual (Songliang) against the authoritarian master (who stays faceless, as we never do clearly see the lord’s face), and survival with absurd rules that others play by and take so seriously, makes this movie comparable to Orwell’s “1984” or Kesey’s  “One Flew Over the Cuckoo’s Nest.” However, Zhang Yimou denies any political meaning in his film, and I agree. I think this would be a rather forced inference coming from a Western point of view.

With all this said, “Raise the Red Lantern” is one of those infrequently produced movies that take a woman’s perspective. It is a film not to be missed, and I will add another recommendation for those who would like to explore women’s role in Chinese society deeper. There is wonderful book by Jung Chang, Wild Swans: Three Daughters of China. It tells story of three generations of women in 20th century China. It is very personal, and at the same time tells a lot about the changes that occurred from an insider perspective.