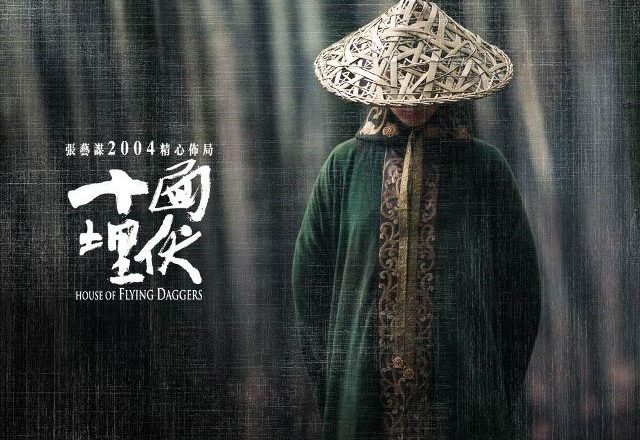 “House Of Flying Daggers” on Amazon.

With “House of Flying Daggers” Zhang Yimou brings the Tang dynasty to the wide screen with iconic beauty and elegant wuxia. It is a true fairy tale of love and martial arts in Ancient China. This film was highly acclaimed by critics, ranked #77 by Empire magazine in “The Greatest 100 Films in World Cinema” (Source: Empire Online) , and #93 by Slant magazine in “The 100 Best films of the Aughts” (Source: Slant Magazine). Roger Ebert, describing the film, said:

The film is so good to look at and listen to that, as with some operas, the story is almost beside the point, serving primarily to get us from one spectacular scene to another.

A stylistic ancient scroll shown on the opening screen explains that it is the year 859 AD, a time of unrest in the Tang dynasty. A rebel group called “House of Flying Daggers” is challenging the government. They steal from the rich and give to the poor in Robin Hood-style, thus gaining a lot of support from the common people. Two police captains, Jin (Takeshi Kaneshiro) and Liu (Andy Lau), are on a mission to catch the new rebel leader within ten days. To Jin, this mission seems close to impossible, but Liu has some new intelligence. There is a rumor that a new girl in the luxury brothel “Peony Pavillion” may be a member of the Flying Daggers. Jin is eager to explore this rumor and goes to the brothel. He summons the suspect, Mei (Zhang Ziyi), and to his surprise, she is blind.

Her smart answer pleases Jin. After watching her enchanting performance, the drunken captain attacks Mei, trying to undress her. Captain Liu comes in and tries to arrest them both. Mei is only rescued by the promise to perform “Echo Dance” for Captain Liu. The “Echo Dance” scene is probably one of the most beautiful dance and wuxia mixtures put on screen. Mei then reveals her true motive by trying to kill Liu, but he defeats and arrests her. However, the policemen still need to get to the new leader of the rebels. Thus Liu presents his plan in which Jin has to “rescue” Mei, and then pretend that he wants to side with the Flying Daggers. Their hope is that she will lead them to the rebel leader. Jin agrees to the mission, emphasizing that seducing women is his specialty, and they begin their beautiful journey through mountains and forests (most of shots were actually filmed in Ukraine, not China). Initially a fairly carefree and light story, it turns darker and more suspenseful as other plot twists are uncovered. The story keeps the film interesting, as well as beautiful to watch up, until the end.

The Tang dynasty is often considered a “golden age” of Chinese civilization during which all areas of culture and civilization flourished – literature and poetry (famous poets Li Bai and Du Fu are from Tang period), painting, commerce, as well as science and innovation. Bordellos of the time were places of beauty and artistic expression, just as the one depicted in the film. The head mistresses of bordellos had wealth and power. Courtesans were intelligent, artful singers and poets who entertained guests with their skills and conversation.

Although they were renowned for their polite behavior, the courtesans were known to dominate conversation with elite men. The ladies were not afraid to openly castigate or criticize prominent male guests who talked too much or too loudly, boasted too much of their accomplishments, or whose rude behavior had in some way ruined dinner for everyone (on one occasion a courtesan even beat up a drunken man who had insulted her). (…) Men enjoyed the presence of assertive, active women.

This validates “House of Flying Daggers” as an accurate historic re-imagination of the attitudes of the time.

The fact that there is unrest against the government of that time is also historically accurate. There are several factors showing the growing tension and distance between rich and poor. First, after the An Shi Rebellion (See more about it here: Wikipedia), central government lost a lot of its power to military governors. These governors had the right to collect taxes from the people. Second, in those times the “equal-field system” was abandoned, which then allowed people to freely sell and buy land. This system used to give a lot of support to farmers, but after it was abandoned, many poor fell into debt. Third, just a year before the events of this film, there was an enormous flood in the Grand Canal in 858 AD where lot of people drowned, resulting in disastrous effects on the economy. (Source: Wikipedia) Here we can apply Marxist class struggle theory and say that the rebellion was a product of tension created by the increasing suppression of the poor by the rich. The portrayed events would have been even more turbulent because of the natural calamity the year before. These were exactly the conditions when a rebel band that steals from the rich and gives to the poor could achieve great support from common people as mentioned in the beginning of the film.

Having said that, history is only a setting for “House of Flying Daggers”. Though it is a Tang period inspired love story where:

individuals often share the plot designs of quick passion, inescapable societal pressure leading to the abandonment of romance, followed by a period of melancholy.

In other words, lovers had to face the choice between passion and duty, which created even more tension.