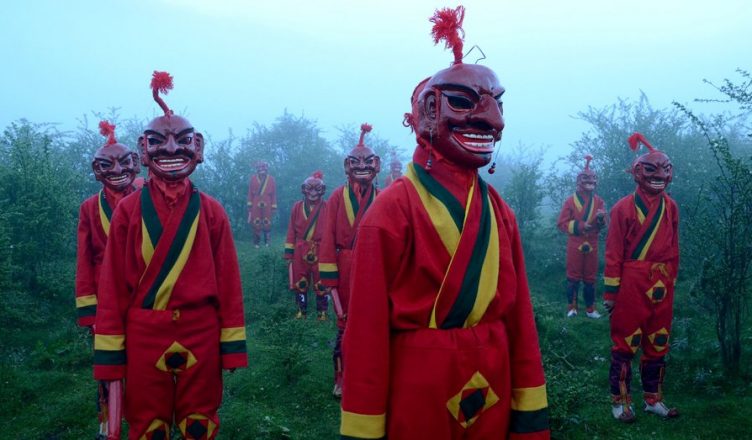 I have been fascinated with Bhutan for over a decade now. I have never been there – this Buddhist Kingdom tucked on the Himalayas’ eastern edge is mostly closed to tourists. You can’t just pack your backpack and make a budget trip there – the only way to travel in Bhutan is via an official travel agency paying a significant amount each day. This is a deliberate (and, in my opinion, a very sensible) strategy taken up by the country’s government to avoid the negative effects of large tourism influx. This closedness adds to the mystery and allure of this country, doesn’t it?

However, what initially got me curious was their unusual mythology and in particular the abundant phallic imagery in the monasteries and on rural houses. Yes, you read it correctly. 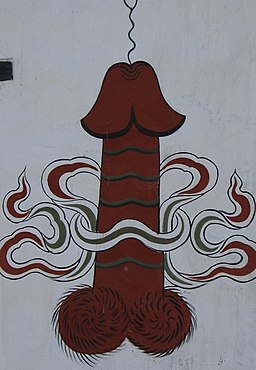 Back in the 16th century, there was this mad Bhutanese saint (nyönpa) Drukpa Kunley who came from Tibet to Bhutan, traveled around the country and painted penises on buildings as a part of his Buddhist teachings. The images and the wooden carved phalluses were supposed to protect people from demons and demonesses, as in seeing the organ the demons would be subdued by its power.

The nyönpa lived in a place known as Lobesa close to Chimi Lhakhang to drive away demonesses and protect the local people. According to the legend, he used to hit the evil forces with his penis (or cohabited with them) and turn them into protective deities. (Wikipedia)

He also enlightened women with his own “Thunderbolt of Flaming Wisdom” and was also known as “The Saint of 5,000 Women”.

His intention was to show that it is possible to be enlightened, impart enlightenment, and still lead a very healthy sex life. He demonstrated that celibacy was not necessary for being enlightened. In addition, he wanted to expand the range of means by which enlightenment could be imparted, while adding new evolutionary prospects to the overarching tradition. (Wikipedia)

So yes, Bhutan had his own 60s-like sexual freedom revolution but back in the 16th century.

People in Bhutan, especially in rural areas use the symbols in their homes – paintings on the walls and wooden ones as charms against demons. Women who want to get pregnant go to the monastery and get hit in the head with a wooden or bone phallus – fertility symbol. Even though nowadays urban people shy away from this tradition, Drukpa Kunley’s legacy is very alive in today’s Bhutan. So, no wonder that a feature from this country is titled “The Red Phallus”.

The movie starts with a very interesting note. The young girl Sangay (Tshering Euden) doesn’t want to go to school because she’s mocked by her schoolmates. We don’t see mocking in-action but we do see a large phallus was drawn on a blackboard – a joke aimed at her because her father (Dorji Gyeltshen) is Ap Atsara who carves wooden phalluses for a living. She’s sixteen, bored with her slow-paced rural life, fed up with the mockery and tired of her controlling father – something many teenagers can relate to (minus the phallus-carving part).

First, a little side note about Atsaras and their role in society. An Atsara is a red-masked creature from Buddhist mythology. He’s a trickster, a storyteller, and a comedic creature. Like all tricksters from different mythologies, Atsaras are beloved by folk. Acting the red-masked Atsara at the Tsechu festival (Annual religious festival) is an honor, usually passed down from father to son. Besides a red mask, Atsara also has a whip and a wooden phallus – connecting the imagery and the principles back to our nyönpa Drukpa Kunley.

So, Ap Atsara is a respected man in the village. He acts as Atsara in the festival, he carves the protective phalluses and performs rituals at people’s homes to ward them from demons. One day Sangay has to carry a pile of wooden phalluses to a home of her classmate – an awkward thing for a teenage girl. We can emphasize with her frustration about her situation and how trapped she feels. The surrounding rural scenery of cloudy mountains and rice fields is gorgeous but it’s also her prison.

Overall, the set-up of the story was great for both drama and comedy. Now, the pay-off, I found it very lacking, unfortunately. I will not spoil the movie, so my analysis here will be vague.

It was an unfulfilled story – things just happened and the eventual climax was shown for shock value not coming out of character or plot. There were many unnecessary details in the plot that did not add to the story. For example, the fact that Passa, Sangay’s boyfriend was epileptic – there was a scene showing him collapse but it did not matter in the story at all. The things that were set up and hinted at as important, including the modern perception of a tradition, teenage girl’s struggle with her identity, the missing mother and the piece of clothing she had to finish – none of these threads were concluded. And they had so much potential.

I read a few other reviews that tried to tie the meaning/message of this movie to the oppression of women in rural areas. However, I did not find this topic as a major point in the movie. There were a few dialog lines about it but it wasn’t expressed in any significant way or explained better. There were a few religious musings about karma but, again, they were not at the core of the story or the conclusion. Thus, in the end, it is hard to define what this movie actually wanted to say.

On a positive note, the film is gorgeous – the scenery is mesmerizing and the music is enchanting. If you don’t mind the slow pace (and the unfulfilled story) and just want to experience something from a very different culture, then check out “The Red Phallus”. And read up about Bhutanese culture and history – it’s absolutely unique and fascinating.

It is a pleasure to see such a professionally-made movie from Bhutan and looking forward to seeing more.

2 thoughts on “The Red Phallus”